A linear number sequence (aka arithmetic sequence) is an ordered set of numbers which has a common (constant) difference between consecutive terms.

Each number in a sequence, separated by commas, is called a term of this sequence. The first term is called T1, followed by T2, T3, and so on.

In above example, the common difference equals 7.

Finding the Next Term

The rule for finding the next term is to add d (common difference) to the previous term:

In above example, the rule for finding the next term is to add 7 (common difference) to the previous term, e.g.

The nth term (Tn) of a linear number sequence allows to calculate any term of the sequence:

We can now work out any term for above example. E.g. the 40th therm:

We can graph the term on the x axis and the term value on the y axis. Joining all the points will result a linear (straight) line. 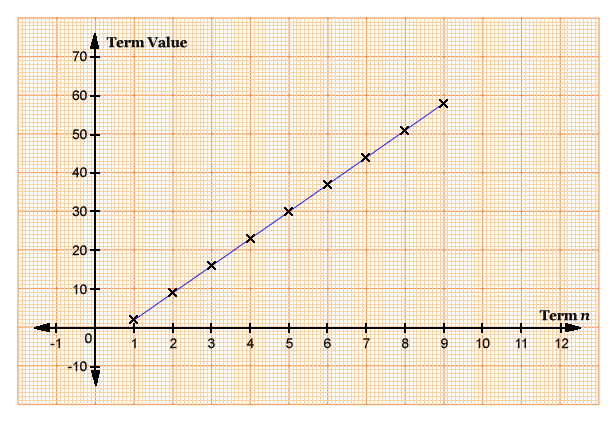